Seattle garage trio Night Beats make their Heavenly Records debut with their brazen third LP, Who Sold My Generation. Fronted by guitar slinger Danny Lee Blackwell, Night Beats have amassed a fairly substantial catalog in their six years together, issuing a variety of different singles and compilation tracks alongside their two previous albums. With regard to their overall sound, not a great deal has changed since they first dropped their debut single, "H-Bomb," in 2010. Their talent for brash, riffy psych-rock with plenty of attitude remains their greatest strength, and their marriage of Nuggets-era sounds with the contemporary lo-fi aesthetic of 21st century garage revivalists puts them in league with other prominent West Coast acts like Thee Oh Sees and Ty Segall. As on 2013's Sonic Bloom, reverb is king and Night Beats' swagger is captured here in a thick cacophony of the stuff as Blackwell's ace guitar work bounces wildly around the room on standouts like the free-ranging "Sunday Mourning" and the hooky single "No Cops." With its radio static, vintage broadcast samples, and spoken incantations, experimental opener "Celebration #1" sets a freewheeling, almost anarchistic tone and Night Beats do manage to maintain that energy, if not the mischievous intent, throughout the album. Like a lot of bands playing in this ultimately familiar style, there's a feeling that they probably slay it on-stage, harnessing the energy of a wild bar crowd and working their vintage rock magic. On record, they do retain some of that magnetism, but much of their songwriting seems to simply serve their musical style without making that much of an impact. There are exceptions, of course, especially with album closer "Egypt Berry," which is easily this album's strongest track. Who Sold My Generation certainly has all the right moves and is probably Night Beats' best album to date, but to get the full effect, look for them on tour.

Dwight Twilley was one of the best and most influential figures on the Southern power pop scene, and unlike Big Star, the Scruffs, or the Sneakers, he achieved that most cherished pop music accolade, a hit single, and not once but twice ("I'm on Fire" rose to number 16 in 1975, and "Girls" managed the same feat in 1984). However, Twilley was just successful enough to end up having record company problems, and his best work has been scattered over several albums for different labels. The fine Australian reissue label Raven Records has pulled together the highlights from his albums for Shelter, Arista, and EMI-America, and On Fire! The Best of 1975-84 is a superb collection of his beautifully crafted Beatlesque pop tunes. Unlike many Southern power poppers, Twilley clearly loved the British Invasion style while revealing equal comfort with the sounds of his home territories, and the rockabilly accents of "TV," the subtle but swaggering "I'm on Fire," and the funky beats of "Feeling in the Dark" made clear out of the box that this wasn't another guy aping the Fab Four, and when he did write straightforward pop tunes, he did so with smarts and imagination, and he was a very impressive rock & roll singer, too. The first 13 tracks of On Fire! are drawn from Twilley's recordings with early collaborator Phil Seymour, with plenty of representative cuts from their albums Sincerely and Twilley Don't Mind, as well as the long-unreleased track "Shark (In the Dark)" and the single "Somebody to Love," drawn from sessions for an unreleased album with Jack Nitzsche. The rest of the album is taken from Twilley's first three solo efforts (Twilley, Scuba Divers, and Jungle), and if his occasional reliance on synthesizers and drum machines dates the production (Roger Linn, who invented the Linn Drum Computer, played in Twilley's band), the songs are as savvy and satisfying as ever, and while "Girls" was a hit single, by all rights "I'm Back Again," "Alone in My Room," and "Don't You Love Her" should have enjoyed the same success. With the fine career overview XXI out of print, On Fire! is arguably the best introduction to Dwight Twilley's classic pop music you can buy, and it's 77 minutes of pop and rock bliss that anyone with a taste for a great hook and a good lyric will love. 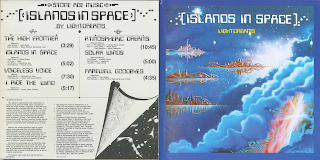 LightDreams was a studio band created in 1981 during the time of the recording and limited edition, vinyl release of Paul Marcano's album Islands in Space. The album featured all original songs along with contributions by composers Andre Martin and Cory Rhyon as well as player contributions by John Walker on lead, Tim Moore on Sax and Art Lowe on bass.

The music of LightDreams has been characterized as 'alternative psychedelic, electronic folk music' with a delicate blend of acoustic, symphonic and electronica elements.