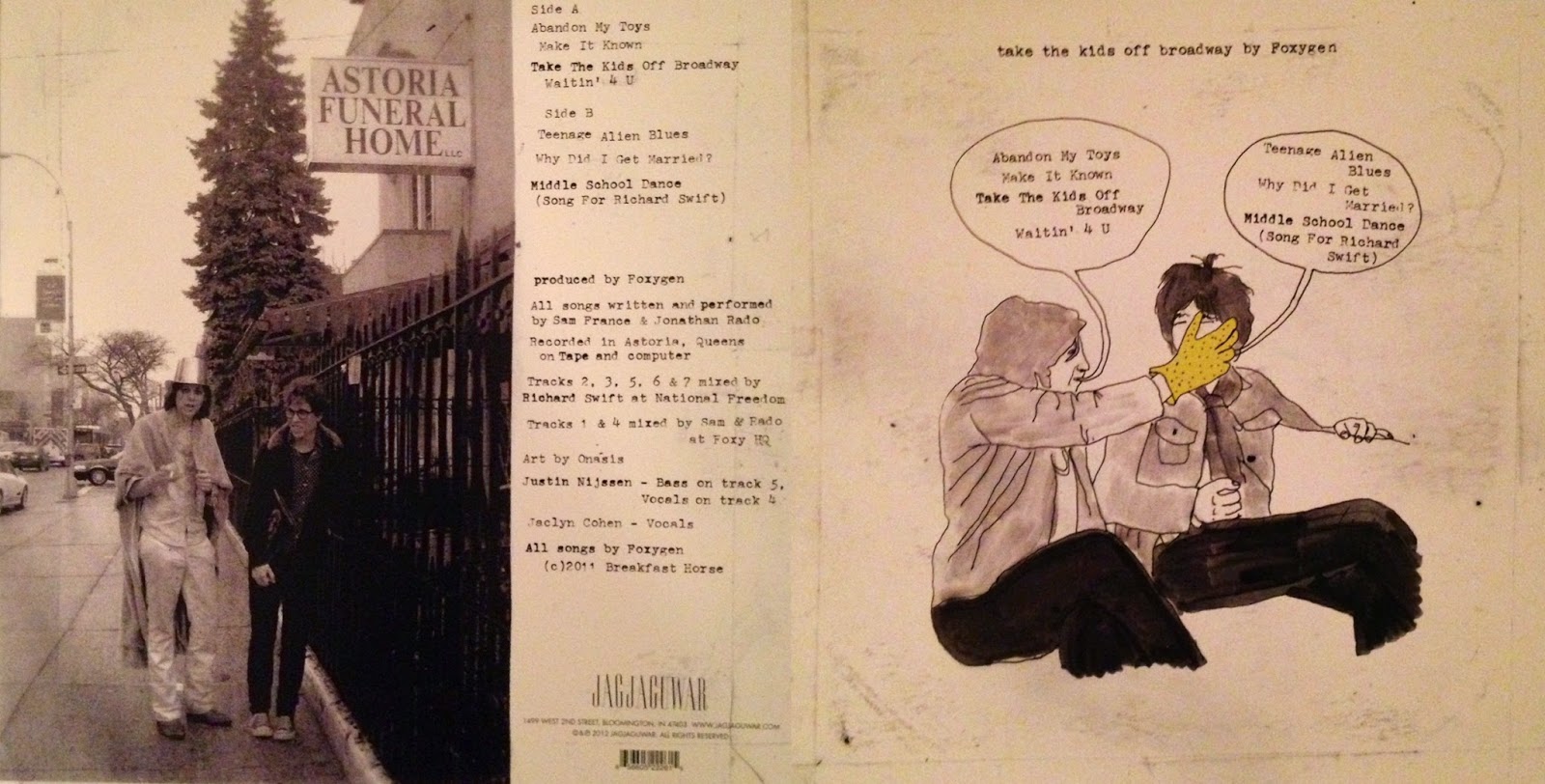 Foxygen, the bi-coastal duo of Olympia Washington's Sam France and N.Y.C.'s Jonathan Rado, don't make songs in the traditional sense as much as they mash every possible sonic reference point into schizophrenic micro-albums, cramming so many constantly changing sounds into their compositions, the songs threaten to overwhelm themselves. "Abandon My Toys," the six-minute opus that kicks off the group's first widely available release, Take the Kids Off Broadway, merges raw and wistful interpretations of '60s rock influences like the Kinks and Loaded-era Velvet Underground with some of the kitchen-sink freak folk of early Beck albums. Without ever repeating a chorus or verse, the song somehow keeps a plot that connects with the listener. "Abandon My Toys" has a hard time sitting still, but it's just a pace-setting first look into the album's frantic world of sound. "Make It Known" filters every era of Rolling Stones into a compact space, interjecting short, blasting horn sections and ending abruptly in a swell of electronics. The title track channels Bowie's glammy moments for a verse or two before making a series of sharp left turns into faux-girl group, blue-eyed soul, and back again. Much like the short-lived genius of the Unicorns, Foxygen's songs are bedroom symphonies, chock-full of precisely placed shifts so deliberate and chaotically orchestrated they risk sounding like alienating gibberish. The ten-minute plus "Teenage Alien Blues" runs an exhausting gambit of Suicide-esque vocal shouts to Jagger-meets-Reed snippets, borrowing melodies directly from each frontman's respective band before wandering into an inexplicably fuzzed-out bass section for a few seconds before moving on. Take the Kids Off Broadway is without a doubt a seemingly impenetrable beast, and it takes a moment to build up a filter from its ceaseless shifts and non-stop references to isolated moments from the history of classic rock. Despite its dense and initially off-putting nature, the seven songs become more than collages of favorite moments from the duo's record collections. Music this overbearingly organized and stuffed with spirit is no small feat, and repeat listens flatten out some of the insanity to reveal well-constructed if intentionally overwrought pop gems. Much like Of Montreal's self-analytical constant key-changing, or Olivia Tremor Control's homespun masterpieces, Foxygen has made something that reaches out for so many possibilities it ends up reverting inward, ultimately sounding insular, like a highway of endlessly firing synapses in someone elses' brain.

Although it produced two medium-sized R&B hits ("He Made a Woman Out of Me" and "Do Your Duty," both on this compilation), Bettye LaVette's time with the Silver Fox and SSS International labels in 1969-1970 was short, yielding just four singles. That's not really enough for a good-value CD reissue compilation, so Sundazed sensibly gathered all eight of the tracks, plus three that were unreleased at the time, onto this 11-song vinyl LP anthology. It's more dependably earthy soul than excitingly groundbreaking, but it's solid material that matches Southern and edgy Detroit styles, though it tilts a little more toward the former in sensibility. Imagine if Erma Franklin were crossed with Carla Thomas and you get a little idea of how this comes off, though it's not obviously imitative of any singer in particular. Sundazed designed the LP to make it look very much like an album that could have been issued in 1970 (down to the brief exuberant liner notes), making this truly the Bettye LaVette Silver Fox/SSS International long-player that could have been issued, but never was.