Bud Mathis was an all-round mover and shaker on the Sunset Strip throughout the '60s, and in a manner not unlike Kim Fowley, he used his knowledge of what was "hip" and "in" to manage bands, write songs, and even attempt performing himself. Bud Mathis Sunset Strip features 14 cuts recorded between 1963 and 1967 and is a solid compilation of garage, folk-rock, and psychedelia. The Brain Train, later to become Clear Light, open the album with both sides of their September 1967 45: "Me" is a pounding psych-punk effort that blends a mystical lyric and quasi-religious backing vocals with some fine Jeff Beck-inspired guitar rave-ups. The flip "Black Roses" is the very same song the band re-recorded as Clear Light for their debut 45; this earlier version has even more power and a nice West Coast feel supplied by the female backing vocalist. Also of notable quality are the three Joint Effort tracks which exemplify the feel of the "Free Love," flowers, and beads era of the Strip in 1967 with harmony vocals, jangling folk-rock guitars, and fuzzed-out solos working together in unison. The earlier garage-punk/frat efforts by Bud Mathis & the Fairviews, the Fairviews, the 5th Dimension, and Mike Mathis aren't as strong by any means, but are integral to a study of the development of Mathis as a writer and Svengali. Even though the cruder material sits somewhat uncomfortably alongside the folk-rock and psychedelia, this is a varied and enjoyable set.

Etiquetas: VVAA - Take the Brain Train to the Third Eye

Formed in Wakefield in the mid 70s - Strangeways were probably one of the finest Power-Pop bands ever to walk the earth. This collection features their classic singles, a load of unreleased tracks including a rare demo track of 'All The Sounds Of Fear' that was produced by Tommy Ramone and great cover versions of The Troggs 'Wild Thing' (re-titled 'Chose Sauvage' the French version) and The Archies 'Sugar Sugar'. This is an album that any Power Pop fan would be glad to have in their collection.14 powerful pop tunes.

This male Louisiana foursome’s custom reminds me a lot of the breezy sunshine approach of early Sweet Comfort. Spirited songs with a light jazzrock angle and a bit of jamming (some good electric guitar, organ, electric piano), along with a few loungy soft jazz ballads ala Sonlight. Opens with a version of Ken Medema’s ‘On A Day Like Today’ with brisk electric bass and Vibraphone soloing. Tell me they don’t sound dead-on like Sweet Comfort Band on ‘I May Never Pass This Way Again’. Cool echoed electric guitar solo on ‘Can I Trust Him With My Life?’. Shifts into moody realms for the dreamy ballad ‘Two Worlds’. Also some good rural folkrocking, including covers of songs by Dove (‘Preacher Man’), The Way (‘There’s A Love’) and The Talbots (‘Coming Home To Jesus’). ‘Show Them The Way’ closes the album with smooth-rippling bongo percussion, warm harmonies, summery organ and jazzy acoustic guitar soloing. Nice wholesome sound through and through. Colorful psychedelic cover.   (The Archivist, 4th edition by Ken Scott).

Etiquetas: East of the Altar

The Rock is the third album from Frankie Miller, and the only one officially credited to The Frankie Miller Band. The album features backing from The Memphis Horns and The Edwin Hawkins Singers.

The album was recorded in sight of the prison of Alcatraz in San Francisco, Miller commented that it was only music that had saved him that kind of fate and dedicated the song, The Rock, to the plight of prisoners, a reference to his 2nd cousin Jimmy Boyle.

"Ain't Got No Money" became the album’s most covered song with notable versions from Cher, Chris Farlowe and Bob Seger. The song, "Drunken Nights In The City", was written for his late-night drinking buddy Jimmy Johnstone, the former (Celtic FC) Scottish footballer. Etta James covered the song A Fool In Love for her 1990 album, Stickin' to My Guns.

The Barracudas - Again Live in '93

This London-based Anglo-American band, whose members include Jeremy Gluck (vocals), Robin Wills (guitar), David Buckley (bass), and Nick Turner (drums), was formed in 1979 and scored a U.K. chart hit in 1980 with the neo-surf song "Summer Fun." Turner and Buckley left after the release of the first album Drop Out Qith the Barracudas (1981) and were replaced by Jim Dickson and Terry Smith. Chris Wilson also joined on guitar. This quintet made the second and third albums, Meantime and Endeavour to Preserve, which were released only in France. The Barracudas disbanded in December 1984, but re-formed in 1989.

TRYAD - If Only You Believe In Lovin' [USA folk psychedelic 1972] 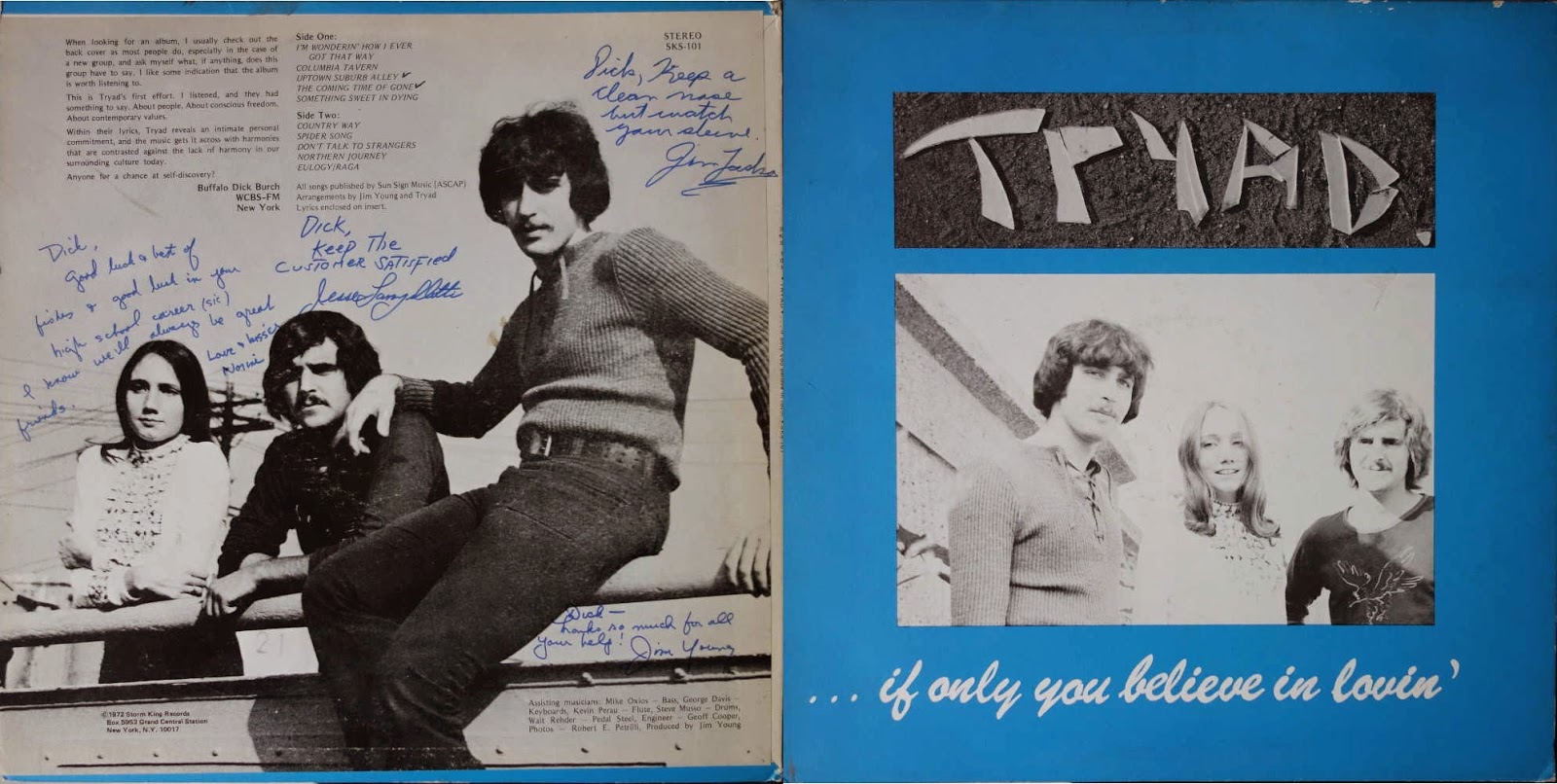 Tryad was a band from New York to be formed by trio , Jim Lasko, Jesse Lanzillotti, and Norine Lyons in early 70s.
and They released '...If Only You Believe in Lovin'' lp on the Storm King records in 1972. At that time, New York local session men also joined in making alburm and they played rich sound with the various vibes of melodic folk, west coast influenced country rock and acid folk.
Original lp is very rare and sold with above 1000 bucks once...In this time, this lp was reissued to cd by big pink and will be released soon.
This is another great work to be very delightful to collectors..