Thornton, Fradkin and Unger and The Big Band - Pass on This Side [1974] 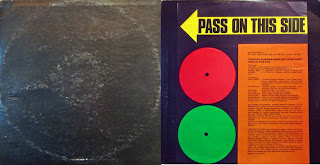 Including Paul Thornton who had previously been in The Godz, this album has nothing in common with his earlier avant garde work. It is in fact largely inspired by Dylan circa 1966 and The Byrds (Roger McGuinn even gets a "Special Thanx"). The material was written by Fradkin and Thornton and features some good tracks with 12 string guitar: Walkin Guitar Blues, Oh Woman, God Bless California (with Paul and Linda McCartney!), Sometimes or Jimi (a rip-off of Hey Joe dedicated to Hendrix).

Another New Yorker, David Peel, guests on one track, a version of his To Err Is Human. This is strongly "influenced" by Dylan's Maggie's Farm, with lyrics like "I'm just a human being that don't give a damn". The album was recorded in New York between 1970 and 1974 and produced by Fradkin.

Etiquetas: Fradkin and Unger and The Big Band, Thornton 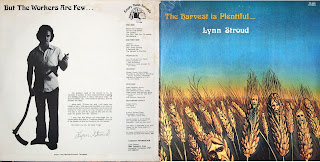 This one cracks me up. Church band of seven guys (a couple of whom look about 12 years old!) doing “Christianized” versions of secular songs. Feel the Beatles cringe as they sing “Something in the way Jesus moves…”. ‘Amazing Grace’ to the tune of ‘House Of The Rising Sun’. ‘Oh Happy Day’ with a drum solo. All backed with a low-budget electric rock sound and a guitarist stuck on the same riff throughout the whole lp. Darn right awful at times, yet brims with a charm and sincerity that pulls you in. No credits given anywhere – even the band members are referred to only as “Tim”, “Steve”, etc. Those smug grins on the back cover tell me they had fun doing this project. Don’t bother with their other album Inside-Out as it’s just ordinary gospel. File next to Wauhob Family. (The Archivist, 4th edition by Ken Scott).

The band was founded in 2013 by The Chesterfield Kings bassist Andy Babiuk and a roster of founding members including Blondie drummer Clem Burke, The Cars guitarist Elliot Easton, and The Romantics guitarist and vocalist Wally Palmar. Palmar also plays the harmonica on the band's self-titled first album, which was released 5 August 2014 and produced by The Ramones producer Ed Stasium and included Small Faces and Faces pianist Ian McLagan on Hammond organ and Wurlitzer until his death in December of 2014. The group says that the album took just five days to complete at Babiuk's Fab Gear Studios in Rochester, N.Y. with many of the songs being recorded in a single take.[3] The group's name was suggested by Steven Van Zandt whose Wicked Cool Records label had released three of Babiuk's Chesterfield Kings albums. The band's first concert date was 16 October 2014 at Londonderry, New Hampshire's Tupelo Music Hall.

High Life is the second album by Frankie Miller. It was produced by Allen Toussaint, who also composed seven songs on the album. "Play Something Sweet (Brickyard Blues)" was almost immediately covered by Three Dog Night and "Shoo Rah" was covered by Betty Wright -- and both tracks become chart hits.

Despite poor sales, the album was critically well received, although Miller was to disown it as Chrysalis Records issued the record in remixed form, without Miller's or Toussaint's knowledge or consent. The remix by Don Davis and Lou Costello remains the most widely available version of High Life; Toussaint and Miller's original mix of the album was made available on the 2011 Frankie Miller box set That's Who.

This is a great collection of songs from an artist who has not tested our affection with meandering solo material or endless mercenary reunion tours.  He’s the real thing: a rocker who’s an artist.  And with Other People’s Lives, well, he’s really got you.

No, it’s not me but a British acoustic singer/songwriter that just happens to share my name – so don’t accuse me of patting my own back when I recommend this album. Like early Mark Heard, Dennis Ryder, Dave Mattson and the like, Ken’s another one of those simple and gentle folksingers whose music is warm and appealing. String quartet backs the sorrowful ‘Surrender’ while soft organ accompanies the title track (a poem written to his daughter). Bass and drums build some folkrock edges around ‘Do You Want To Know’ and ‘How Can You Prove’. For purely acoustic moods, check out ‘Don’t Be Wise’ and the delicate ballad ‘As I’m Singing To You’. One instance of brass, one of steel guitar (the country folk ‘I’ve Tried’), plus some touches of organ, bongos and electric guitar in spots, but the focus is primarily Ken and his acoustic guitar in Appalachian Melody fashion. Fine album, beautiful cover, collectible label. Nice name, too. Ken Scott